Jack Houston has once again been crowned the IWWF Waterski Racing Junior World Champion! Not only are Jack and Team Stinga Racing the first person and team to win back to back junior championships, they have done this whilst remaining undefeated throughout.

17 year Jack showed dedication, commitment and determination in beating off all challenges at Clontarf, Morton Bay, 25 kilometres North of Brisbane, winning all 4 events to take the crown.

Jack did exactly that two years ago in Belgium, winning 4 of 4 events there to take his first junior world waterski championship and to emulate this achievement on his home turf is quite a feat.

Competition was held this time on Morton Bay, Brisbane over four days in September and each day Jack was the winner in a grueling race against world class competitors.

Winnebago provided an Esperance Premium A Class Motorhome for the use of Team Stinga Racing throughout competition, which allowed Jack to rest up comfortably in readiness for the next day’s racing and to prepare himself mentally prior to each of the races.

On the last day of competition Jack had the chance to go undefeated in two world campaigns and score 8 wins from 8 races. Successfully completing this achievement cemented Jack Houston as the most successful junior competitor ever at the international level. 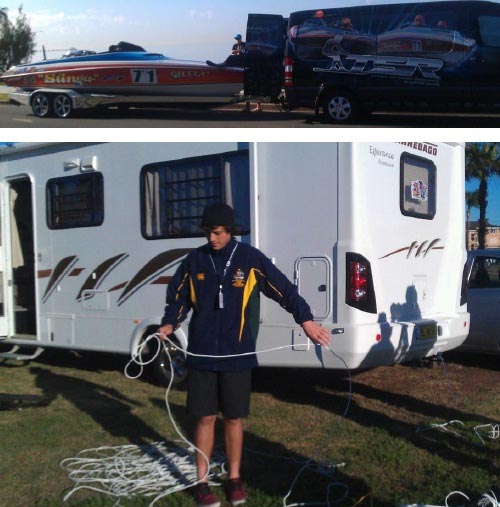