WIN an AVIDA Birdsville and help someone in need

Home/News/WIN an AVIDA Birdsville and help someone in need

WIN an AVIDA Birdsville and help someone in need

Damian Jobson, his wife Brooke and two boys Kynan & Zayb have had their lives turned upside down following a tragic accident in May 2016.

Damian was severely injured in a local Rugby League game, breaking his C4 & C5 vertebrae after an unfortunate tackle, leaving him a C4 quadriplegic. As a result, Damian & his family are now facing the challenges associated with ongoing rehabilitation as well as many day to day challenges as he now learns to cope with living as a quadriplegic.

His wife Brooke stated, “it’s the simple things that we take for granted that’s a whole new challenge for Damian. Things like not being able to brush his own teeth, being able to shave or even to eat a simple meal. This has been a big hit to his pride”.

Above all, Damian’s biggest heartbreak is not being able to physically engage with his 2 young boys. Both being under the age of 10, they have so much growing up to do but he can’t kneel down to hug them when they’ve hurt themselves. He can no longer chase them around the house or have a game of touch footy with them in the back yard. This leaves Damian feeling disconnected because he cannot participate in the things his family used to love doing together.

If you are in a position to be able to support Damian and his family and would like the chance to WIN an AVIDA Birdsville , Harvey Norman package or a Hello World Voucher please go to www.risefordamian.com.au to purchase your tickets. The odds of winning one of these great prizes are high as tickets sales are limited.

Money raised from this raffle will go directly to the Jobson family for any ongoing medical costs and rehabilitation.

The prizes will be drawn on NINE’s The Footy Show which will be aired 21 September 2017.

Thank you and good luck!

Please don’t forget to check out the video slideshow below too! 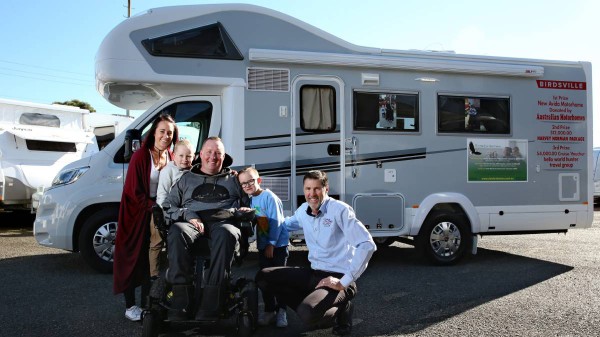