Best of the Best Business 2012

Home/News/Best of the Best Business 2012

Best of the Best Business 2012

At an impressive winter wonderland gala event set in the Blue Mountains of New South Wales; Winnebago was named by Caravan and Camping Industry Association NSW as Best of the Best Trade Business for 2012.

Winnebago, an Australian family owned and operated company established in 1965, took out the prestigious award for the second year in a row.

Winnebago’s CEO Ben Binns and Project Administration Manager Alana Towle took great pride in accepting this award. “I am very honoured to receive this award on behalf of our staff and dealer network” Ben said, “it is great to have such a wonderful team behind us and if it wasn’t for them we wouldn’t be up here tonight receiving this award”.

At the gala event Winnebago also received the coveted Best Motorhome, Campervan and Fifth Wheeler award. This is the third year in a row that Winnebago has won this award and Winnebago were delighted that judge Kristina Major, involved in tourism award judging for many years had seen fit to award them for their efforts over the past year.

The night wasn’t complete without Winnebago taking out their third award – the desired Innovation in Environment Award Trade Business. During the past year Winnebago has taken significant steps in reducing its waste material throughout the factory and office premises.

With a dedicated team in place that is solely responsible for implementing and reducing our waste output, Winnebago has saved costs, and increased recycling. This has helped to promote a tidier and safer environment to work in and reduced our carbon footprint in our local area of Penrith.

Over the years Winnebago has won a large number of Australian awards and received high praise from industry colleagues and customers alike, for its contribution as a successful, innovative and responsible participant in the Australian Recreational Vehicle industry over almost five decades. 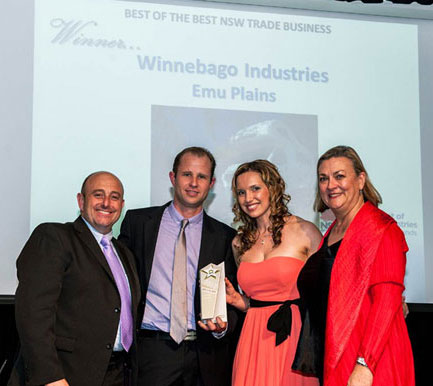