This independent review on the Avida B7993SL Eyre Motorhome was conducted and written by Malcolm Street from iMotorhome.

In the Avida range of motorhomes the Eyre is a bit different. Apart from being a sleek looking motorhome, the original layout had a very distinctive European look about it. By that I mean it was a layout that generally used space in a very effective way and didn’t have a great deal of empty space – if you understand the distinction!

More recently Avida introduced an Eyre model with an kerbside slide-out. It still uses much of the design from the original layout but naturally has more internal area when the slide-out is open. 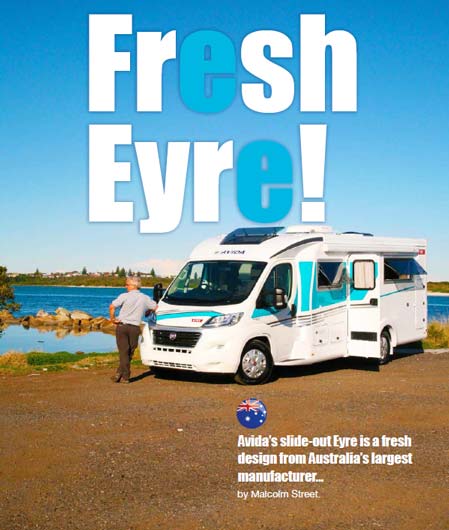 Given the Eyre is rather a low-slung looking motorhome it’s no surprise it comes with a Fiat Ducato X295 cab bolted to an AL-KO chassis. The Ducato is the Multijet 180 variant with the 3.0-litre 132 kW/400 Nm turbo diesel. Like most of the rest of the Avida fleet, the Eyre is built using a fully welded metal frame for the walls, floor and roof. Moulded fibreglass is used for the front and rear panels, while the walls are laminated together with backing panels and an outer fibreglass skin. Slightly differently, the one piece floor has a ply timber sheet above and metal sheeting below for underbody protection.

Earlier Eyre designs did have a bit of a problem with external storage capacity, but a large rear boot with doors on both sides and the rear wall, plus two lockers on the kerb side, works very well. The 2 x 4 kg gas cylinders live in a locker on the other side, just aft of the driver’s cab door. Just a small issue to keep in mind is that if the side bin doors are open, then the side windows cannot be opened or closed properly – not a major drama. 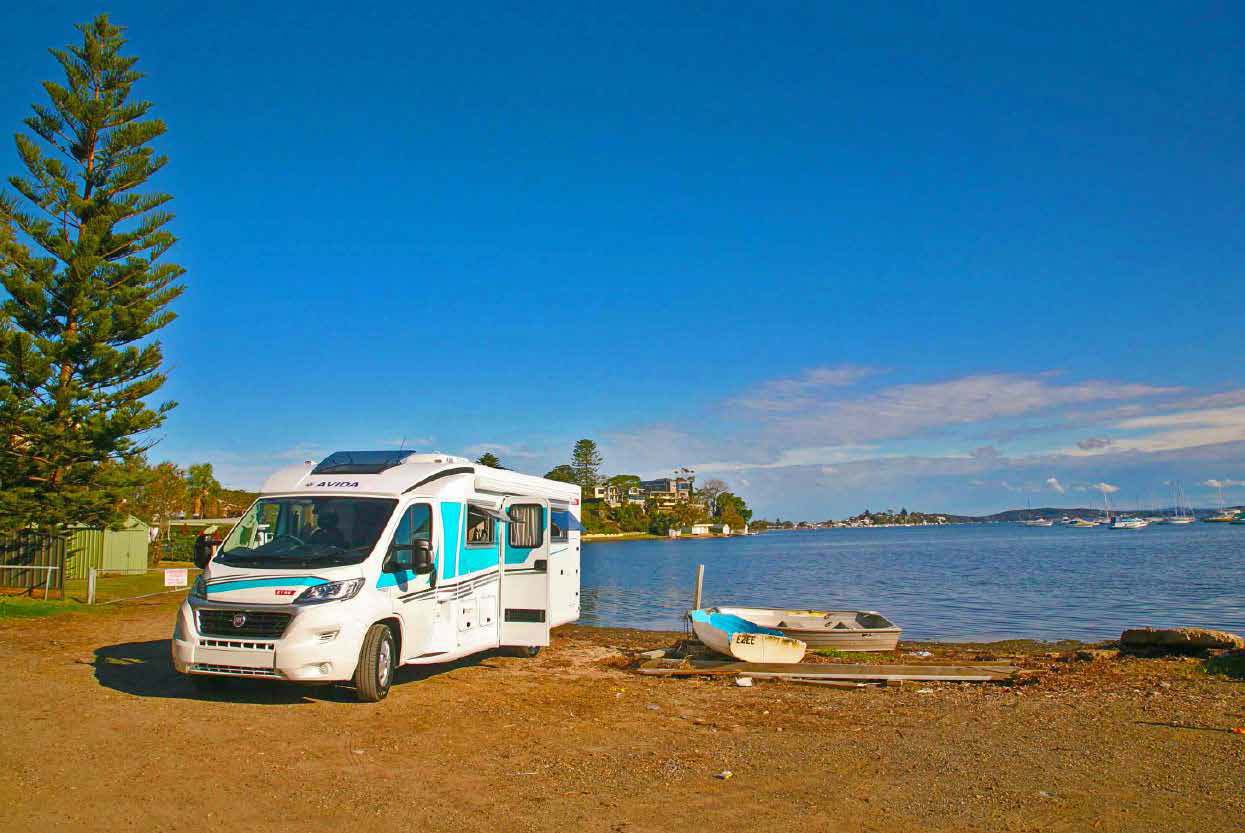 The house batteries, charger and 12 V fuses are in a compartment accessed via the rear boot, just inside the kerb-side door. About the only problem with this arrangement is it isn’t easy to get to the fuses.

Given the 3504 kg tare weight the Eyre SL is quite a nimble performer; certainly on the open road and most of the time around town, except when the six-speed AMT gearbox decides to dither around a bit in the lower gears. Although the Ducato is the latest one from Fiat, the review model still did not come with cup holders instead of the hinged compartment in the centre console.

A better class of radio/CD player does seem to be fitted these days. One of the little features I liked about driving the Eyre was the ability to leave the Skyview hatch open when travelling. It provides fresh air without the buffeting from open driver/passenger windows.

Compared to the nonslide- out model Eyre there isn’t much difference in the rear: That means there is an island bed, with a split bathroom ahead of it. In the front though, things are very different. In the earlier (non-slide) model both the driver and passenger seats swivel and mesh in with a sideways-facing seat behind the passenger, and a forwardfacing two-person lounge, with table, behind the driver. That leaves space in the mid area, opposite the entry door, for the kitchen.

But the slide-out changes all this. For a start the entry door is moved slightly rearwards, while most of the kitchen – the cooker and two-door fridge – are now located in the slideout. Both cab seats swivel and there’s an L-shaped lounge behind the passenger seat, but the driver’s seat is somewhat blocked by a kitchen bench.

All the electrics in the Eyre are controlled from a touch panel found at the end of the overhead lockers, by the entry door, which is quite convenient. Also to be found there is the radio/ CD player.

The cab seats and lounge are all on the same level so there’s no problem using the Zwaardvis mounted table that sits between them. For two people the most accommodating arrangement is for one person in the passenger seat and the other on the lounge behind it.

A flat screen TV is mounted on the wall by the entry door and, given the layout of the lounge/ cab seats, that’s probably the best place for it. Due to the kitchen bench extension behind the driver’s seat the front area does have a slightly cramped feel about it, even with the big hatch above the cab.

What the slide-out does give with this layout is more kitchen space and more room to move in it. There’s a nominal amount of bench space, with some extra to be found behind the cooktop. There is, however, only one drawer due to the inverter microwave being below the cooktop.

Additional storage is provided by the bench extension, which also houses both a round sink and separate drainer. Beneath, the cupboard is split with a shelved area and a slightly awkward to get at wire basket pantry. Extra shelves are fitted in the space above the sink drainer.

Undoubtedly the most European looking area in this motorhome is the bedroom. The island bed measures a full 1.95 m x 1.53 m (6 ft 5 in x 5 ft), but has a slightly rounded shape and sits a fair height off the floor. That’s no problem because there are quite wide steps on either side, all fitted with LED strip lighting so you don’t trip over in the dark!

Instead of the usual bedhead array of cabinetry there are just two side wardrobes with recessed compartments at bed level, which replace bed side cabinets. One additional feature is the mirror behind the bed: good for motorhome users, but awkward for photographers trying to get a photo of the bed!

At first glance there does’t appear to be much in the way of bedroom storage, but that is because most is located under the bed. Lifting the bed base gives access to an almost walkin wardrobe, with a shelved area, two drawers and a hanging rack – although that can really only be used with the bed raised. It’s a clever arrangement and one that includes strip lights that come on automatically when the bed base is lifted.

The individual shower and toilet cubicles are quite small, but that’s really just a design compromise to accommodate the layout of the rest of the motorhome. There is just enough room in the shower to turn around without banging elbows, while across the way the toilet cubicle has both cassette toilet and small wash basin vanity.

Fortunately the cassette toilet is the swivel variety, so there are no elbow banging issues either. It might sound like I’m being a bit critical of the size, but since I am someone who doesn’t need oversized amenities in a motorhome I reckon it’s okay. For privacy in the bedroom/bathroom area, the curved door of the toilet cubicle can be fully opened to close off the aisle. 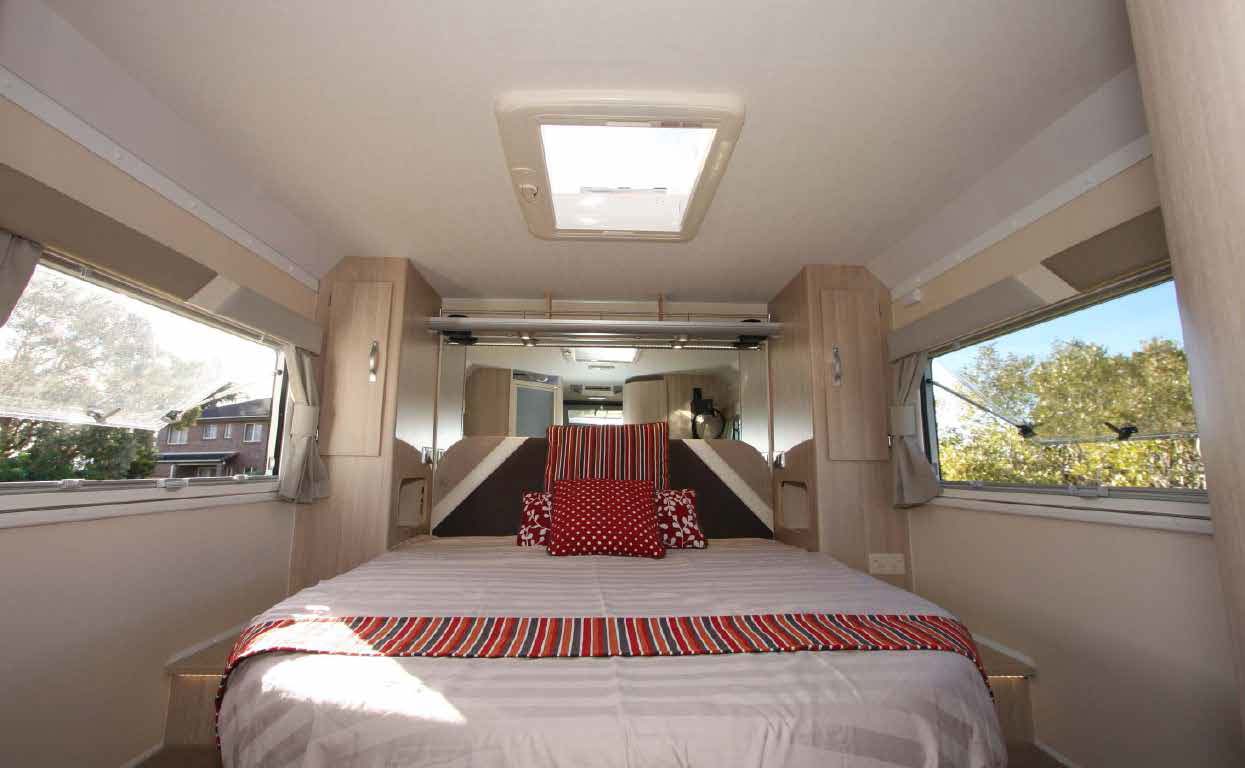 I am going to pontificate here for a bit. Having seen both the Eyre without slide-out and this model with the slide-out, I think the nonslide- out model is the better design. However, for you it’s certainly going to come down to personal preference in the end.

I think that the non slide-out design was cleverer in the way space was used. Sure it was a bit tighter inside, especially around the kitchen, but it could carry four people and integrated the cab area into the rest of the motorhome very well. The slide-out design certainly adds more kitchen space and room generally, but the way it’s done closes off the front seating area somewhat.

Like so many motorhome designs it really comes down to how you travel. If more kitchen area is desirable then the slide-out model is definitely the winner. However, if that is not such an issue then the non slide-out model really doesn’t have any disadvantages and indeed carries some advantages.

Whichever way, I reckon the Eyre layout as a concept is quite clever thinking – building European design into an Australian motorhome.