This independent review on the Avida B7943 Esperance motorhome was conducted and written by iMotorhome.

Anniversary models are always popular as they include a range of extras at no (or little) extra cost. The Binns family has certainly come a long way in the half century since they started making Freeway-brand slide-ons, with patriarch Bruce very much the founding father of the modern Australian motorhome industry.

Well there is certainly a lot of excitement out Emu Plains way, in Sydney’s far west, as Avida RV celebrates 50 years in business. Although the Avida name is relatively new the company started life under the Freeway name building slide-ons, became the familiar Winnebago for many years and now builds under the Avida brand name. 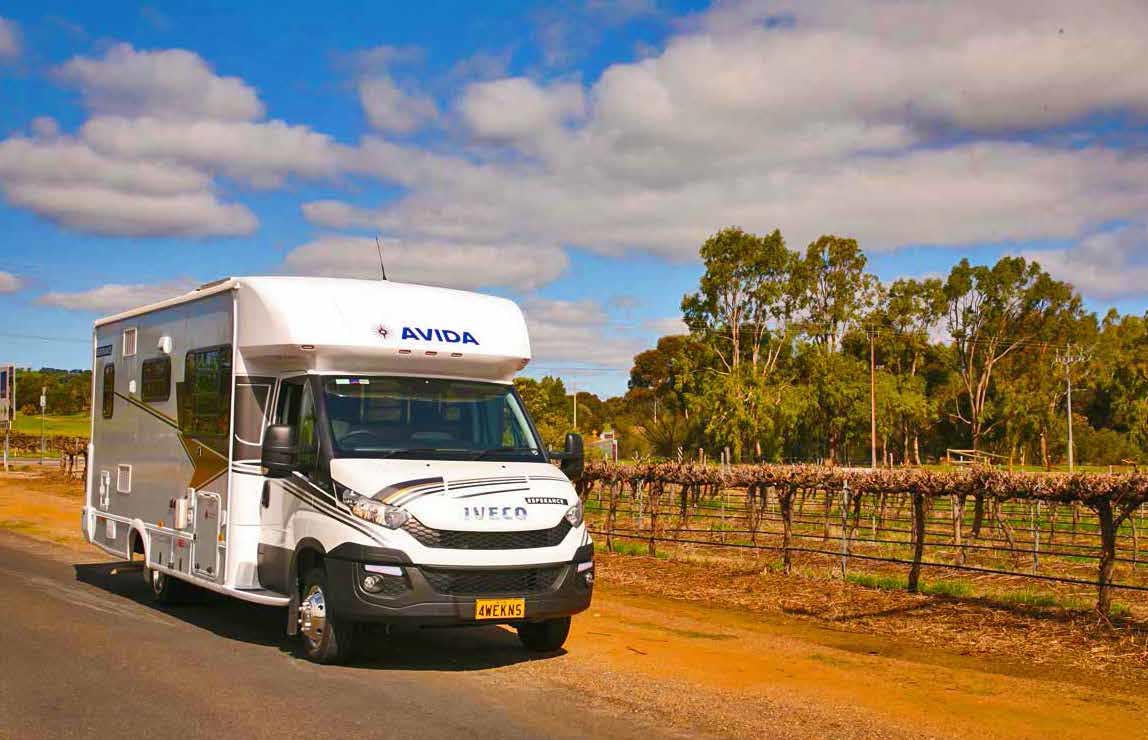 As part of the celebrations Avida is producing a small series of 50th Anniversary vehicles, one being the Esperance B7943 which was launched at a special 50th Anniversary dinner in the Barossa Valley. It’s not actually a new model, but one that comes with extra goodies to celebrate.

One of the more exciting features of this particular motorhome, for me at least, was to finally get my hands on a new model Iveco Daily 50-170 with the fully automatic 8-speed gearbox. It’s been a while coming and one of the first things I did was find a decent hill to try it out. That’s not easy in the Barossa Valley, but eventually I did and I have to say the new gearbox is a vast improvement over the old automated manual transmission (AMT) that often couldn’t decide which gear it should be using! As best I could I gave the new gearbox a good workout and although the motorhome was not fully laden Iveco Australia tells me load doesn’t really change things.

Certainly the 50th Anniversary Esperance looks striking. Avida has been a bit bold here by incorporating part of its original logo into the new decals and it looks good. This is a rear entry-door motorhome and there are no surprises in the door and window department, Avida having opted for its favourite items: Hehr doors and windows. I particularly like the latter being glass with narrow louvers (hoppers), as they can be opened for good air flow without protruding too far and even left open in light rain. It would be nice though if a security door instead of the usual screen door was a standard item.

Build wise the Esperance is traditional Avida style, using a fully welded metal frame for the walls, floor and roof. That frame has a foam sheet filler which Avida reckons acts as both an insulant and road-noise reducer. The walls are laminated with backing panels and an outer fibreglass skin. Slightly differently, the one-piece floor has a ply timber sheet above and metal sheeting below for underfloor protection. Additionally, the front Luton peak/cab surround, rear wall and roof are fully moulded fibreglass. 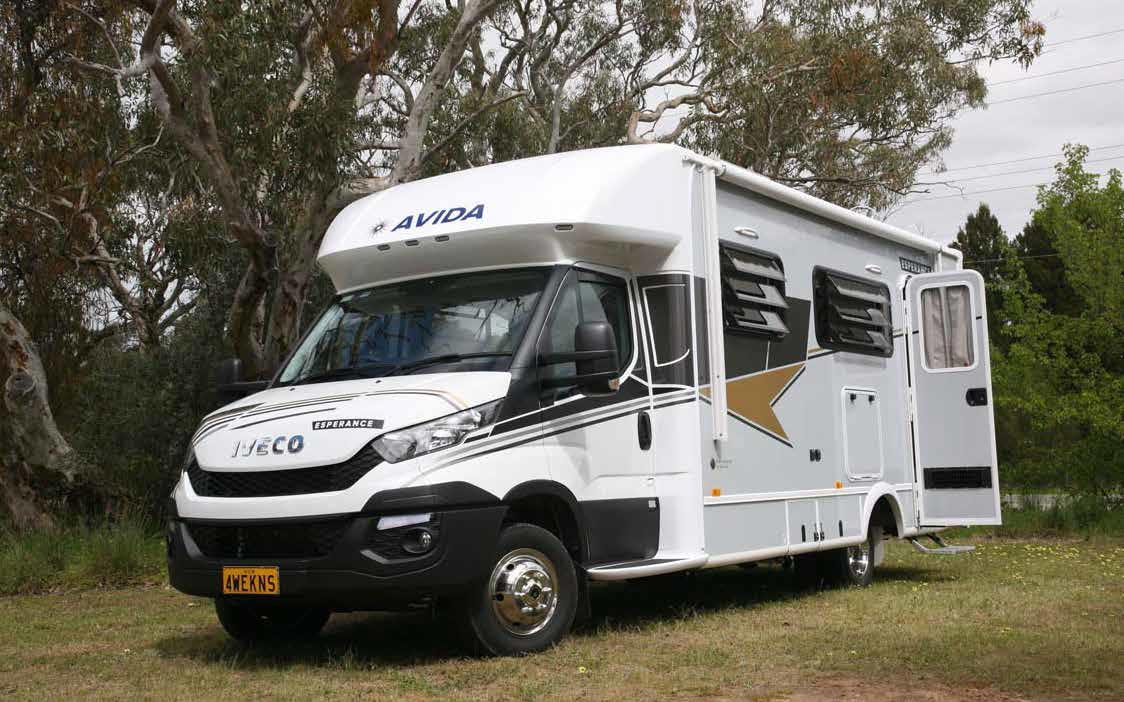 External storage space rates quite highly thanks to three bins on the driver’s side and two on the kerb side. Some are dedicated, like the LPG cylinder and battery storage bins, but the rest offer generous space, particularly the taller one under the driver’s-side lounge window, which is good for all manner of items. Whilst I’m a fan of having all things electrical in the one place – the bin adjacent to the batteries contains the charger, inverter and fuse panel – there’s just one slight problem: the fuse panel is difficult to look at easily, especially if you happen to wear multifocal lenses. To be fair, Avida isn’t the only manufacturer with items in odd places that are difficult to adjust or even look at, but the position could certainly be improved. Like many a good motorhome,this one comes with an entertainment unit, complete with 240 V/12 V sockets and external speakers. In addition, the 50th Anniversary special includes a flat screen TV for outside use – the one inside being fixed in position.

Quite a few Esperance layouts have slideouts but this one doesn’t and I don’t see it as a disadvantage. What Avida has done is fit an elevating bed right behind the driver’s cab. That leaves space for a lounge area underneath, a kitchen/ dinette in the middle and a full width bathroom across the rear.

It’s in the decor that Avida has included more 50th Anniversary items, like Ultra Leather seats with a special embroidered logo, the slate metallic glossy finish on all doors and the silver finish on the walls. Even if you’re not really into anniversary items the interior does have a nice bright and airy feel about it. All windows, except the venetian-fitted kitchen unit, have day/night shades. Quite handily, all major controls and light switches are by the entry door. Some are lower down for easy access from outside and some, like the main control panel, are on the end of the overhead lockers. 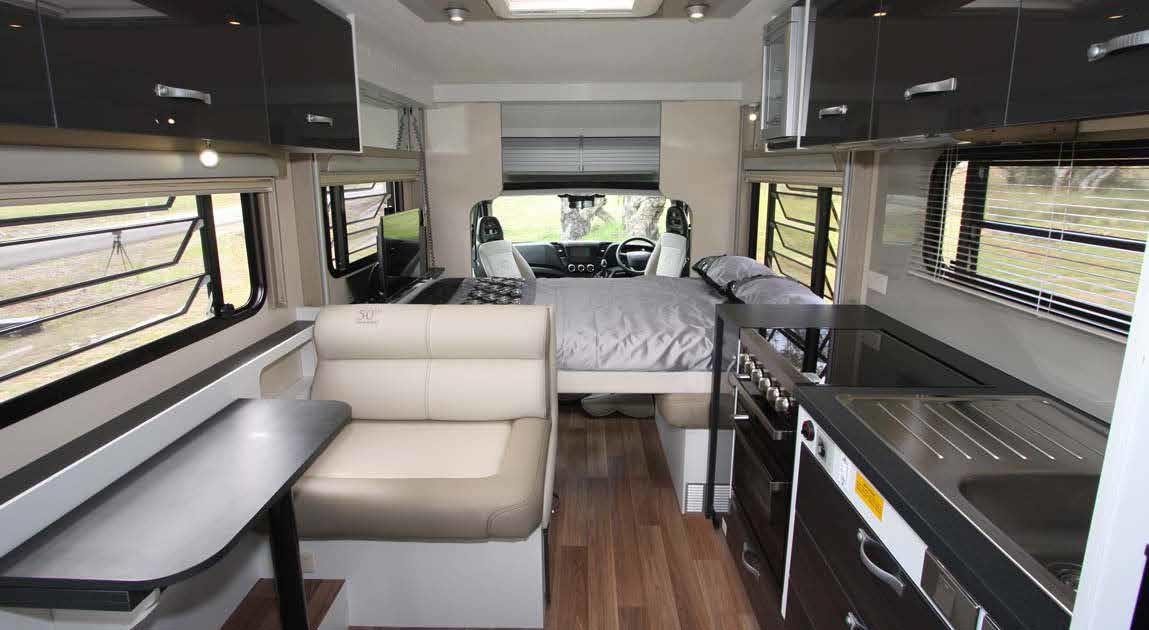 With the bed up out of the way there almost seems to be an excess of space in the lounge area. This consists of an driver’s-side inwardsfacing lounge opposite a TV cabinet, with both cab seats swivelling around to complete the layout.

It would be remiss of me not to mention the Daily’s raised handbrake: a design problem that has existed for some while. I’d have thought that with the new design Iveco might have fixed it. Indeed both Avida and Iveco Australia think so too. Whilst the passenger seat swings around quite easily, the driver’s seat is a bit of a wrestling match with the seat/seat back and handbrake position. Given Iveco is owned by Fiat and the Ducato having the easiest seats to swivel around, you’d sort of think this problem was quite easy to sort. Apparently not. (Ed’s note: Paradise Motor Homes has engineered an electric handbrake for the new Daily that does away with the lever and provides unimpeded seat rotation. I believe the fix has been offered to Iveco Australia as an aftermarket solution).

Handbrake aside, the lounge area offers plenty of room to stretch out and relax, to socialise or watch TV. The TV itself is well sized and hidden in a cabinet until the push of a button raises it into position. It’s been designed to be easily seen from the bed too, which can be raised and lowered without moving the TV.

Items that do have to be moved for bed operation are the four lounge seat cushions if it’s desired to have the bed at an easy ‘get-into’ level. One of the advantages of this set-up is the bed can be left made up, with the pillows stored in the lockers above the cab. Additionally, when the bed does need to be made up it’s easy to stand on either side of it; the cab door providing access for the front side. The only downside to having the bed in the fully lowered position is the ceiling mounted reading lights are a bit hard to reach.

Of course a disadvantage of the elevating bed is it’s not possible to use the lounge and bed at the same time. But for those who go to bed at different times the cafestyle dinette is still available, especially as the tri-fold table can be pushed back. A item of note is the small shelf that runs along under the side window: It has been designed with a compartment at the end of each seat, the rear one having both 12 V and 5 V USB outlets. 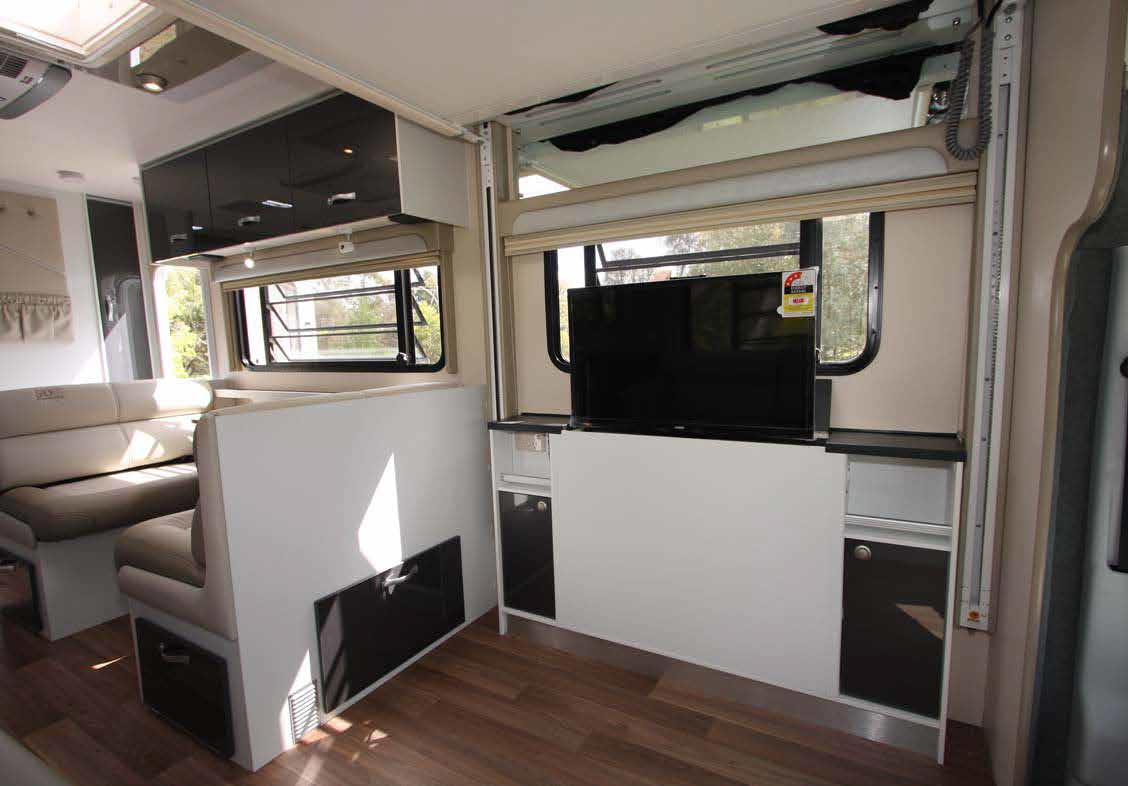 Opposite the dinette the kitchen bench is quite well appointed, with a four-burner cooktop/grill/oven plus a stainless steel sink/ drainer. Butting up against the rear bathroom wall is a 190-litre Dometic fridge with microwave oven above. Actually it doesn’t quite butt up against the bathroom – there’s a full-height, two-door slide-out wire basket pantry in between.

Included in the kitchen fit-out are good sized drawers, overhead lockers with shelves and a Waeco wine bottle cooler. Yet another wire basket pantry at the forward end of the kitchen bench has a solid top that can be used as a bench extension. Both the Webasto diesel heater and Truma water heater controls, along with several light switches, are located just under the sink unit.

Across the rear the bathroom isn’t quite a fullwidth item, mostly because of a handy narrow wardrobe beside the entry door. The bathroom does come with all the currently expected features and includes kerb-side shower cubicle, driver’s-side Dometic cassette toilet and a vanity cabinet complete with a 50th Anniversary ceramic bowl wash basin! Not that it’s a particular concern of mine, but there isn’t a washing machine. Still, the driver’s-side corner cabinet looks like it could easily be converted to hold one. Apart from the cabinet there’s a cupboard under the sink and overhead lockers along the driver’s-side side wall for storage. Both the shower and toilet area are vented by ceiling fan-hatches.

The addition of the new eight-speed Iveco gearbox certainly makes driving a smoother and more pleasurable experience. Undoubtedly the main feature of this Esperance design is the elevating bed, which although not a fixed island bed still offers considerable flexibility in the use of the layout. This also results in more space in the rear, particularly the kitchen. Not a bad compromise I reckon and a big step forward in driving pleasure. Happy anniversary indeed!