This independent review on the Avida Topaz CV7052SL caravan was conducted and written by Caravan & Camping Sales.

Avida began in 1965 manufacturing ute slide-on campers, and in the 1970s built caravans under the Freeway brand.

Then, under the Winnebago moniker it dropped in 2013, it stopped making caravans to concentrate on motorhomes as by the early 1980s the market had slumped thanks to an oil crisis.

Almost three years ago the NSW company returned to building caravans, and today the range consists of the Emerald, Sapphire and Topaz. 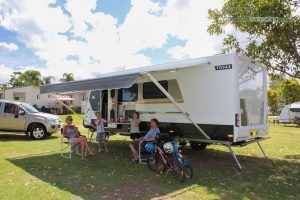 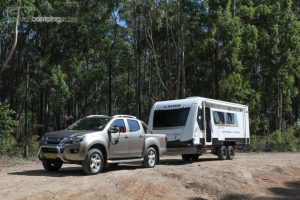 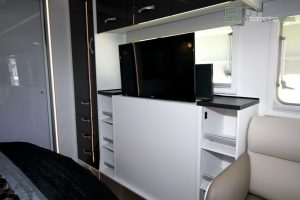 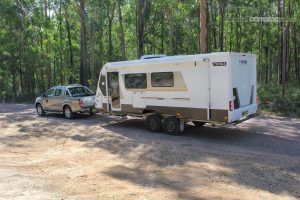 The Topaz 50th Anniversary model has a few extra features to mark the achievement.

The front kitchen splash back is covered in a dark tiled finish, which wraps around to the kitchen’s side walls.

The dinette lounges are embroidered with a 50th Anniversary motif and a small 50th plaque is also fitted to the bulkhead at the entry door.

To get this off-road caravan set up for camp you unlock the door’s two-piece screen mesh door and set it against its magnetic catch, power down the steps and you’re in.

Then the slide-out is powered out by pressing a rocker switch on the cupboard fascia under the sink. This all takes less than 30 seconds.

Getting the caravan closed up is just as quick: the only extra thing you need to do is hold down a button as you power the slide-out in, as a safety measure.

Although Avida continues to build plenty of motorhome slide-outs, this is a first for its caravan range. Extending more than four metres down the van’s offside, the 600mm extra width the slide out creates starts up the front at the kitchen and extends down all the way to past the bed.

Only the bathroom misses out, but it’s a generous space anyway.

This is the only downside with a slide-out: if you want to get to the bathroom with the slide out retracted, you have to climb over the bed. That would seem like a small price to pay considering the cavernous living space you get with the slide-out cracked open. What would be a fairly tight centre corridor in a typical 8ft-wide caravan becomes the centre of a room in the Avida. 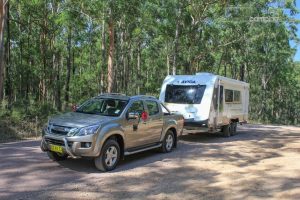 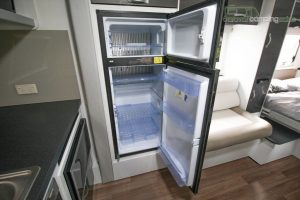 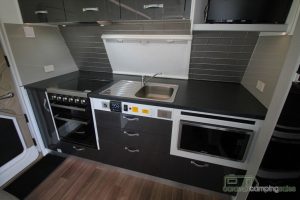 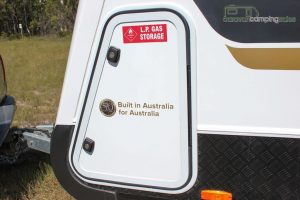 The front kitchen provides a generous bench space and storage above in lockers and below in cupboards and drawers.

On the bench itself, there’s a narrow bench section adjacent to the door and next to the stovetop. Then there’s another narrow section of bench before the single tub stainless sink with drainer and single mixer tap. On the offside of the sink, there’s a large unfettered bench space.

There are three storage lockers above the kitchen, with a flat-screen LCD TV recessed on the offside of the lockers. The TV is mounted on a swivel arm and is clipped in place with a nylon strap when in transit. Below the bench there’s drawer storage and a Samsung microwave.

The fridge/freezer, with a generous 190 litres capacity, is opposite the entry door, on the offside (slide-out) wall and can still be opened with the slide-out closed.

The area that benefits the most from the slide out is the dining/living area. The lounge up against the offside wall is not as wide a bench as the lounge on the nearside wall, but both are comfortable seats.

The dining table offers plenty of adjustment, in height and lateral adjustment. The table is secured to the floor in front of the nearside lounge, but can be removed altogether.

In fact, with the table/leg removed (and the lounge’s backrest) you’ve got a bed for sub-teens or shorter adults, and the offside lounge can also be used for a child’s bed.

With the slide-out extended, there’s plenty of room to walk around the end of the bed, which measures a generous 1880mm x 1550mm.

Not so easy is moving around to the side of the bed that abuts the bathroom wall — it’s a narrow space. 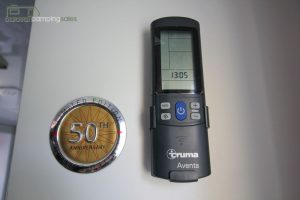 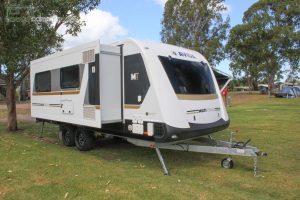 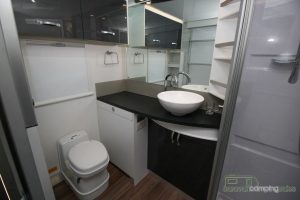 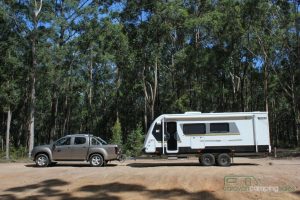 Storage, like everywhere in this layout, is plentiful in the bedroom. There are lockers above and a narrow wardrobe and cupboard at the left side of the bed, and under bed storage too.

There are also narrow bedside tables with open storage cubbies underneath. The left bedside table has a USB charging port, and a reading light is mounted on each side of the bed.

Inside the cabinet on the nearside, opposite the bed, is a LCD TV. The TV pops out of the cabinet with a flick of a switch. Between the cabinet and the bathroom there’s a large wardrobe and there are also lockers along the nearside ceiling.

The bathroom doesn’t need to be part of the slide-out, as it’s a large space as it is. The shower enclosure is tucked into the nearside corner, and while it’s easy to get in and out of past the large glass door it’s a bit narrow once you’re in.

In the centre of the bathroom is a ceramic washbasin sitting on a curved vanity unit. To the left of the washbasin is a washing machine, hidden under a sliding bench top.

The sliding section of the bench top is an ideal platform to place a clothes basket when doing the washing. There are lockers above and cupboards below, plus open shelves with retaining bars to stop items from falling out. 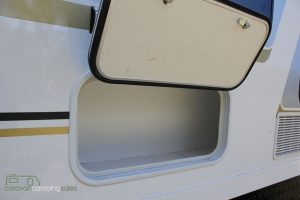 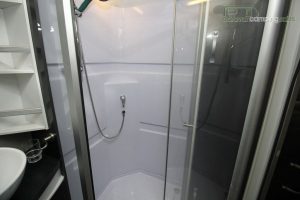 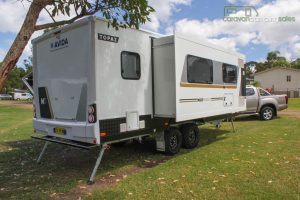 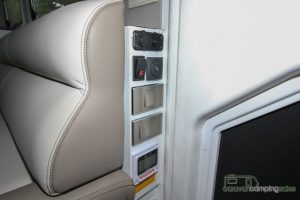 The Avida is built on a steel galvanised chassis, with 150mm RHS longitudinal rails and 100mm drawbar rails. The steel lateral rails have cut-outs, a weight-saving move Avida can afford to take because of the rigid body structure.

The body does away with framing as the composite wall, ceiling and floor panels combine to make a rigid structure. The floor is 49mm thick with an aluminium lining underneath, while the walls are 33mm thick and the roof is 45mm thick.

The twin water tanks share a solid, steel protection plate and are fitted forward of the wheels. Unusual for a caravan — and a by-product of Avida’s motorhome background — is the grey water tank.

It’s tucked underneath at the back, behind the rear wheel set. Behind the grey water tank is the spare alloy wheel, tucked into a strong steel hinged carrier.

The Cruisemaster CRS independent suspension, mud-terrain tyres and D035 off-road coupling are all promising inclusions for rough-road use.

The drawbar is uncluttered — no gas bottle mounts (the gas bottles are fitted inside a compartment at the nearside front) and the jockey wheel is clamped in the centre of the A-frame.

It’s a good design if you want to use a WDH without worrying about whether there’s room for the brackets.

The front boot is large and secured with two locking latches, and has a light. 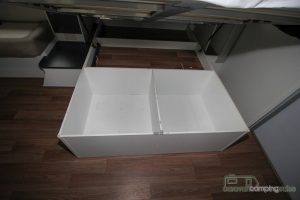 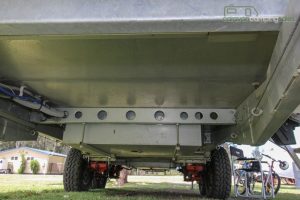 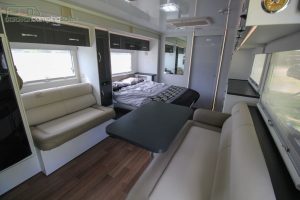 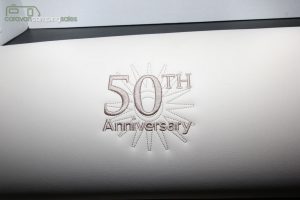 Avida has made the main controls all within easy reach. The power switch is to the right of the door so it’s easy to quickly power up or shut down the interior power consumables (except the fridge, of course).

Below the kitchen bench is a LCD water and battery level indicator panel. The Topaz also has 160Wof solar panels and one 100Ah battery.

This special-edition Topaz slide-out is right up there in the rarified air of ultra-luxury caravans.

While it could do with more on-board 12v battery supply (which could be easily added), the shower might be a bit tight for some, and the 50th Anniversary kitchen decor is a bit gloomy, there’s not much else to complain about.

This Topaz is very well equipped, well put together, offers an impressive 700kg-plus payload and has body and chassis integrity to withstand a punishing Outback trip.