This independent review on the Avida Topaz 50th Anniversary caravan was conducted and written by Caravan World.

After 50 years in the business, Avida celebrates with the launch of its latest Topaz 7052SL caravan and CW was lucky enough to get the first look.

Out at Emu Plains, NSW, the last town west of Sydney before you bump into the Blue Mountains, there’s a bit of excitement in the air; Avida is celebrating 50 years in the recreational vehicle business. Still a family affair, the company founded by Bruce Binns is now in the hands of son Ben and daughter Sam.

Avida (formerly Winnebago) was, previously, best-known for motorhomes but, in the last few years, caravans have been rolling off the production line. As part of the celebration, Avida has produced a range of specially-badged motorhomes and caravans, and CW was lucky enough to be the first to get a good look at this new Topaz 7052SL caravan.

Inside the 6.98m (22ft 11in) Topaz, I was interested to see that Avida has resisted the temptation to opt for the standard front island bed/rear bathroom layout that is so popular these days. Instead, given the long slide-out, which slides just over 600mm (2ft), the kitchen sits across the front of the van, with sideways-facing lounges (with a table) on either side in the forward mid area, an east-west bed with its head in the slide-out and a full-width rear bathroom.

With the slide-out open, it is certainly a spacious layout with plenty of room to move. However, when the slide-out is closed, access is restricted to the front of the van and getting to the bedroom or bathroom requires clambering over furniture. Opening the slide-out is easy, via the conventional switch, but closing requires pushing an extra button. This is actually a clever bit of thinking by Avida, given the proximity of the microwave, which could be open, and protruding flatscreen TV. It’s like a ‘think-before-you-act’ button, and while you might think it’s overly-cautious, I’ve seen a cracked oven door, courtesy of a carelessly closed slide-out, in the past. 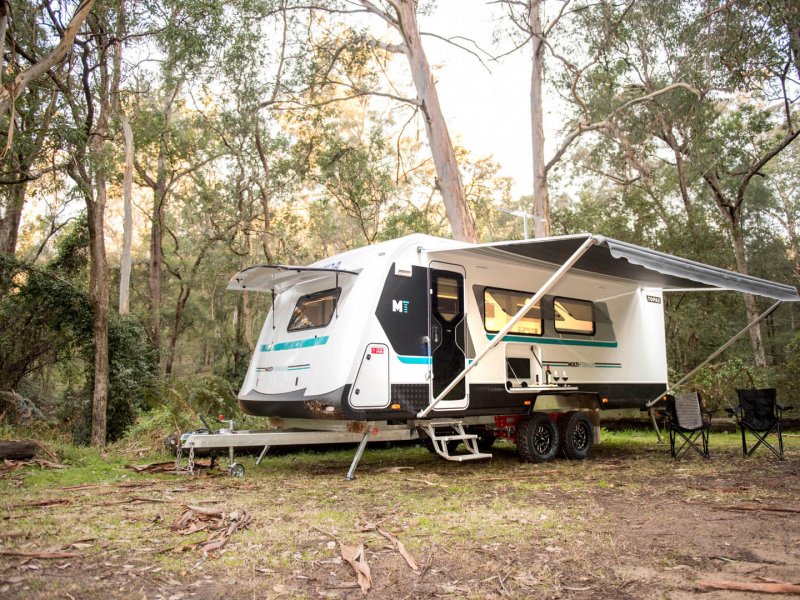 The special anniversary items in the Topaz’s interior include the one-off cream/beige colour scheme, the 50th anniversary logo on the leather lounges, the tiled kitchen splashback and sidewalls, and the one-off metallic slate-coloured cupboard walls. Anyone who particularly likes these colours should probably move sooner rather than later!

I’ve been in many RVs where the electrical and light switches are in funny places. But that’s not the case there – a number of the essentials are right by the front door. This includes a 12V master switch and 12V/5V USB charger sockets. They are located at the top of the panel and above them is a very cleverly placed shelf on which you can sit items being charged. I mention this because quite a few RVs have charger sockets but rarely a nearby shelf to put devices on.

With a slide-out that moves as much as this one, there is plenty of space in the bedroom, even with an east-west bed. The cupboards around the bedhead aren’t symmetrical – the rear side has a bedside cabinet and the forward side has a full-height wardrobe with a compartment cut out at bed level that acts as a bedside shelf. Along the nearside wall, the waist-high cabinet looks large but most of the space is taken up by an electrically-driven flatscreen TV that pops up from below. Between that cabinet and the bathroom is yet another wardrobe with hanging space and drawers. 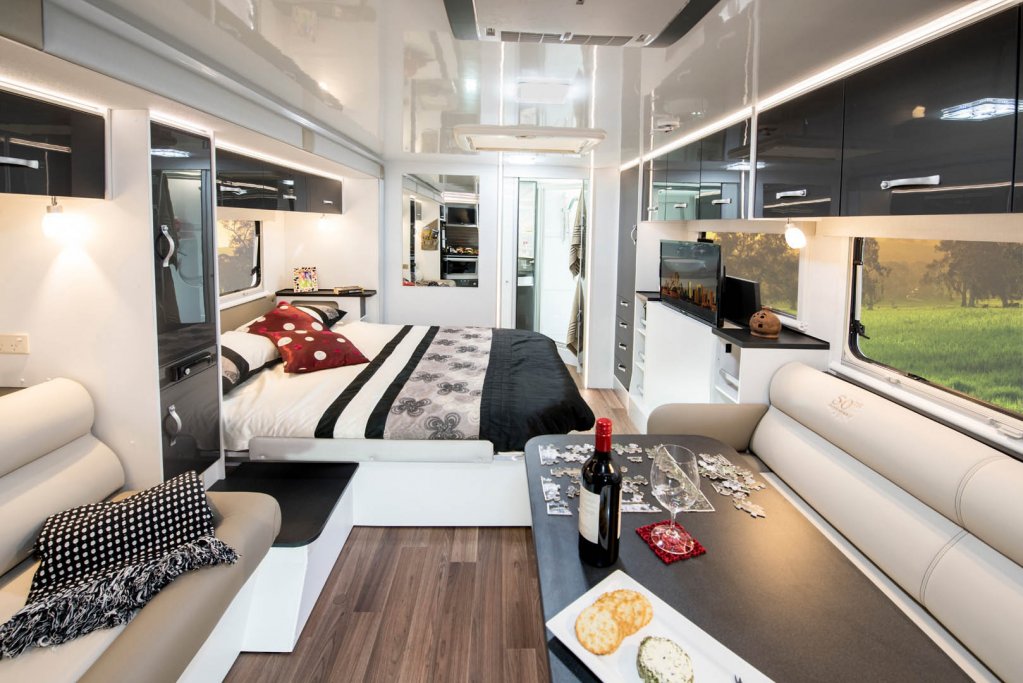 When you step into the Topaz, the kitchen bench is to the left, running along the front of the van – this has been made possible by changing the aforementioned roof profile, which has created the necessary internal height. There is plenty of benchtop space, drawer and overhead locker storage, even with the four-burner cooktop, grill and oven, stainless steel sink and drainer, and under-bench microwave.

I noticed that the more common place for the microwave – in the overhead locker space – has instead been taken by a flatscreen TV, which is positioned so it can be seen from either of the sideways facing lounges. There’s a second TV in the rear for the bedroom.

The decision about which side of the van to put the Zwaardvis-mounted table on, given the nearside lounge is fixed and the offside lounge is in the slide-out, may have caused a dilemma for Avida’s design team. In the end, they opted for the nearside. 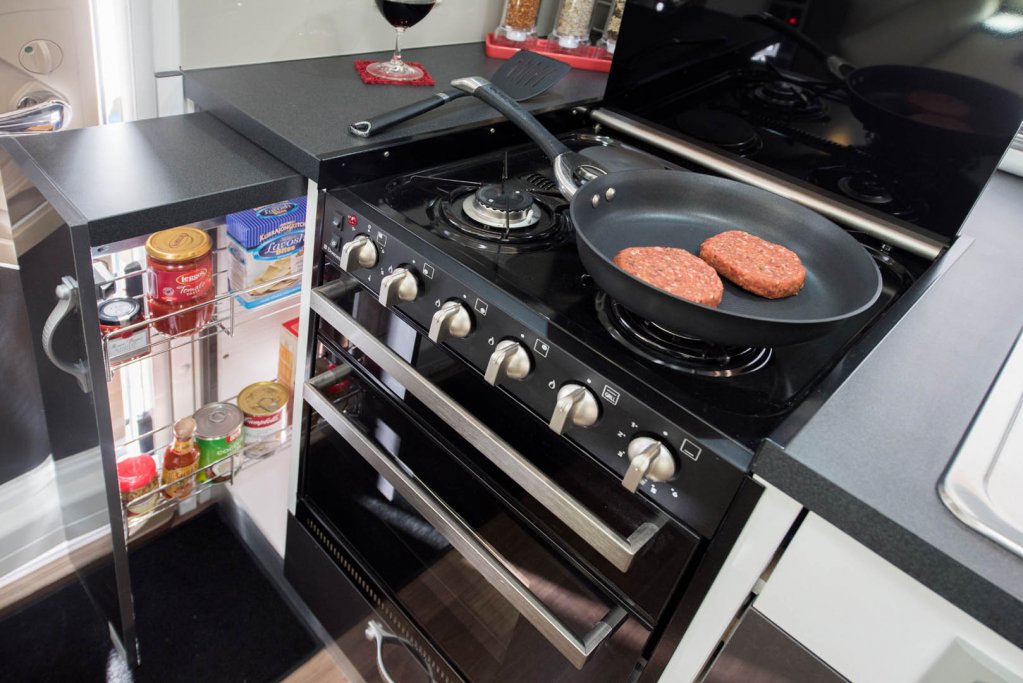 Like the rest of the van, there’s plenty of space in the bathroom. Fitted into the rear nearside corner is a shower cubicle, leaving enough room along the wall for a stylish vanity cabinet that includes a pedestal-style wash basin and a top-loading washing machine under the bench. The benchtop slides out, making it easy to load and unload the washing machine. Fitted into the wall above the laundry is a large window (by bathroom standards) and two overhead lockers. 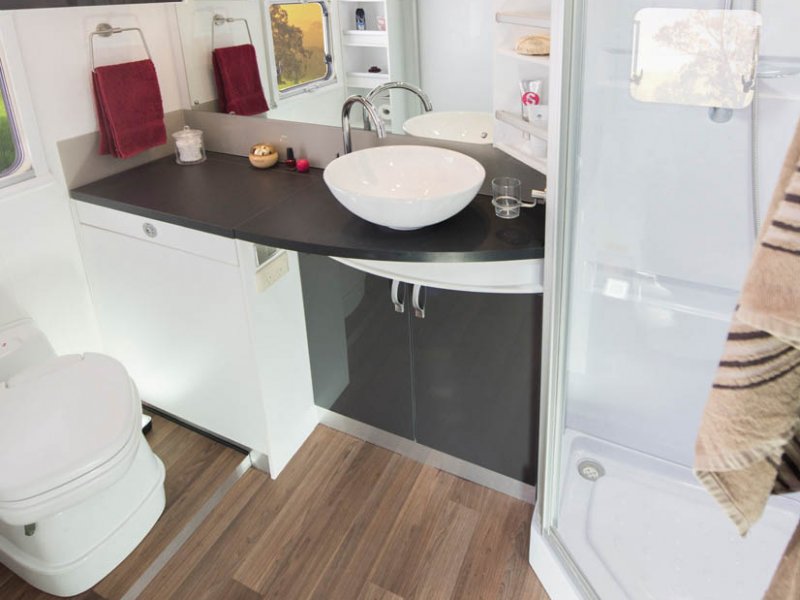 This Topaz comes with a Tare of 2572kg and an ATM of 3300kg, which gives it a very generous load capacity. I have to say that, for a relatively large caravan, it was an easy tow on my test run, which included mountain roads, bush tracks and freeway driving, and the LandCruiser tow vehicle was more than adequate for this van.

Given the Topaz 7052SL is Avida’s flagship caravan, it’s not surprising that it scrubs up very well.

As I noted above, it comes with just above every caravan luxury and is certainly priced to match, but its weight is something to keep in mind when choosing your tow vehicle. 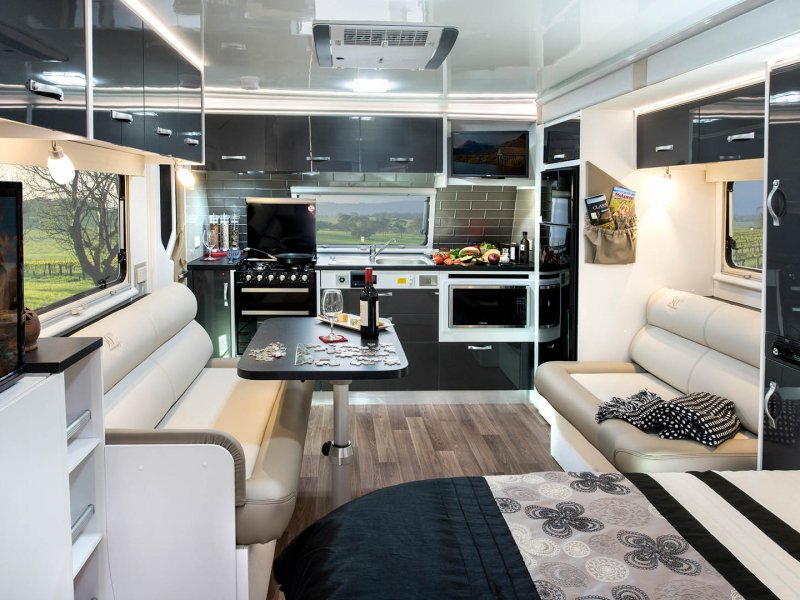